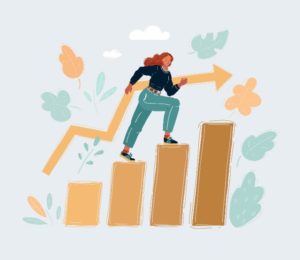 So you’ve been promoted at work – congratulations! Now, make sure you know how to show a promotion on your resume.

I wish I had a dollar for every resume I’ve seen that failed to show off the fact that the person had been promoted. Not only is it being promoted a feather in your cap, but it’s simply more accurate to include it. If your resume makes it look like you held one title for your entire tenure at the company, when actually you moved through two or more titles, isn’t that deceptive? Some recruiters might think so.

There’s more than one way to show promotions on your resume, depending on whether the earlier roles are relevant enough to be worth describing in detail.

How to show a promotion on your resume if the past roles aren’t so relevant:

Often, the earlier roles you held aren’t very relevant to your current job target, in which case there’s little value in cluttering the resume with details about them. If that’s the case, you can simply include a sentence about promotions under your current job, like this:

Promoted from Associate through Operations Manager to current role.

Or, if you’ve been promoted many times within one company:

If those four promotions came quickly, you might write “Promoted four times within six years. ”

My favorite place to put this would be either at the end of the responsibilities paragraph, like this:

Or, if the earlier roles are worth describing in detail:

On the other hand, if the earlier roles yielded relevant experience and / or accomplishments that build your resume, list each role separately. Treating each entry as a separate job, including the company name, location and years of employment, is a good idea for two reasons.

First, this format is easily parsed or “understood” by applicant tracking systems.

Second, this way you can use the same format in both your resume and LinkedIn without exceeding LinkedIn’s character limit for job descriptions. Separating the roles on LinkedIn allows you plenty of wordcount, plenty of keywords and thus better LinkedIn search rankings, so why not use that format on your resume, too, for a consistent presentation.

What if some of the earlier roles are worth describing fully and some aren’t?

In that case break out all the jobs separately, then go ahead and include more detail where it’s warranted, while giving little or no detail for the less-relevant roles. Remember, there’s no rule that says all job descriptions need to be the same length.

How to show a promotion on LinkedIn:

You can do it the same way as you would on a resume, per the tips I’ve provided above.

Now that you know how to show a promotion on a resume or LinkedIn profile, make sure you know how to proofread your resume so your work isn’t derailed by a typo, misspelling or punctuation error!