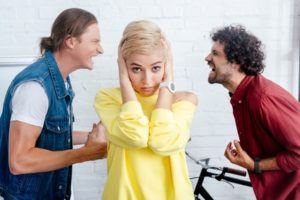 Some of the most common interview questions are about conflict management. For example:

There are two reasons why conflict questions like these are so common.

Let’s look at each of these two reasons to see what it tells us about handling these questions effectively.

The interviewer may be trying to get a sense of your emotional intelligence and your ability to work through issues constructively.

Many of us have demonstrated good conflict management on the job, but we handled the situation intuitively, without consciously thinking about it. We are not necessarily good at explaining how we did it. If that sounds like you, try this: Read up on how to resolve conflicts. Then think of a time when you handled things in the recommended way. Just do not pretend you’ve done something you have not! It will not sound sincere and you will have a hard time answering follow-up questions if the interviewer decides to dig deeper.

Practice telling your conflict resolution story by describing the Problem (the nature of the conflict), the Actions you took and the Results. The results are the best part, so do not be vague there. Good results might include:

To show a positive attitude, observe these Do’s and Don’ts in your answer:

Do not linger in the Problem part of the story – even if the interviewer offers a very sympathetic ear. This is not the time or place for venting! Do move on quickly to your constructive Actions and the positive Results.

Do not damage anyone’s reputation. Do be discreet. If your story reflects poorly on another person, be sure to protect their anonymity. Do not provide any information that could identify them.

Do not use judgmental, absolute language like “This employee was always slacking.” Do be factual and specific instead: “He was behind on his deadlines almost half of the time.”

Do not ridicule. Do be objective and respectful, even though that person is not in the room and has not been identified.

Do not say things like “We had issues all the time,” or “I had a terrible time with this person.” The first statement could reflect poorly on your company; the second, on yourself. Do consider talking about specific behavior rather than the co-worker’s personality.

Do not radiate irritation, resentment or other negative emotions in your body language, tone of voice or choice of words. Do tell the story in a calm and pleasant tone. If you’re still upset about what happened, pick a different example that won’t get you riled up.

Demonstrate good communication skills by paying attention to the wording of the question and answering accordingly.

Plan your answers with these tips in mind, and an interview question about conflict can become a great opportunity to show you’re the kind of team member they’re looking for. (This post was originally published in 2018 and has been updated.)